Bubble football is the revolutionary new sport where players are strapped inside a giant inflatable zorb & play football. It’s the recreation sport of playing football while encased in an inflated ball, similar to a zorb, which covers the player’s upper body and head. This game is typically played in teams in large indoor spaces or outdoor fields.

Bubble football follows the same objectives and overall rules as regular football (i.e., teams compete to hit a ball into the opposing team’s goal) with the added condition that each player must wear an inflatable bubble, similar to a water ball, around their upper torso. 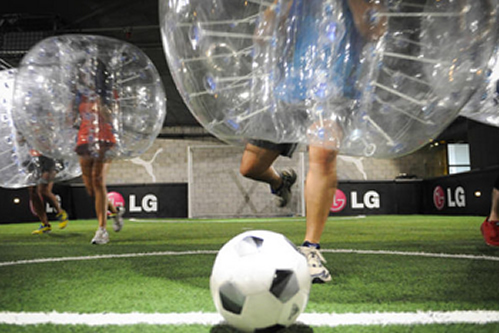 The sport’s popularity is still increasing, with players originating from all over the world.

We will bring the hen teams to the activity venue where you will be met by 2 instructors who will help with all the rules. The rest is up to you!